My Adventures of TriRock Race Weekend

The race weekend for TriRock Asbury Park was filled with a whole lot of interesting experiences, ranging from bizarre to fun.  The race went pretty well and you can read my race report here.  However, I’d like to share my other race weekend experiences including a little miracle that happened late in the day on Saturday.

Packing was a pain.  At around 10:00 a.m. on Saturday I managed to pull myself out of bed after having partied Friday night.  That may or may not have been the best idea.  Feeling sluggish, I tried to run down the list of things I had on my phone that I would need just for the overnight in addition to the list inside my transition bag and started throwing things together.  Having a slight hangover and trying to remember some things sent me into a bit of a panic attack.  My brother helped me to make sure that everything was together by running down my transition bag list and I managed to fit everything in the truck.  I had not eaten anything that afternoon so I threw some Clif Bars in the front seat, bought some Gatorade at the Quick Chek and started towards the gas station and was off to Asbury Park, NJ after filling the gas tank.

In the interest of saving some money, I always opt for the no-toll routes whenever I’m traveling.  It probably would have taken the same time whether I took the Parkway or not.  Despite not taking the toll roads the travel wasn’t bad.  There was a little traffic here and there but once I got through the congested area, Route 18 was good to travel on.

I’ve only been in Asbury Park twice in my lifetime that I’m aware of – once a couple years ago and just this past weekend for the race.  Once I started down Asbury Ave. towards Ocean Ave., things suddenly were not as I expected.  There is a LOT of construction going on.  I’m not sure what exactly they’re adding but I’ve heard a new hotel is going up, it looks like some condos here and there, and the beach area is definitely growing.  It has changed quite a bit since the last time I was there.  I hope that means good things for the future.

Once I got near the Carousel building, I had to find a parking spot.  It was a bit of a challenge but there was a spot half a block away that I secured for myself, and then I headed over to the expo.

The Expo wasn’t as extravagant as the NJ State Tri.  There were a couple vendors, and some sponsor tables for REI, PowerBar, and a couple others.  Nothing really stood out to me which was a bit disappointing for a race that cost $140.  I went inside the carousel building, took care of the waiver, got my packet and swag bag and waited around for the 3PM meeting which had the typical race information about the course.  As I looked into the packet I noticed they did the full TriTats package with all the printed sticky numbers that you didn’t need.  There were the large bib numbers, and all the transition bag numbers which I’m sure cost the organizers extra money.

I wasn’t sure what to do for food.  I knew there were a lot of food places in the immediate area but I wanted something simple that made sense for the day before a race.  I asked Google for the nearest pizzeria and it delivered the first result of “Porta Restaurant.”  It was right around the corner and so I set off in that direction.  It wasn’t too packed so I decided to sit down at the bar and I had a delicious margherita pizza that absolutely blew my mind.  It was seriously awesome and figured after seeing the somewhat short dinner menu I could come back for dinner later since there was a pasta item that seemed appealing.  After I ate quickly I caught the last 30 minutes of mass at a local church down the road.  Since I had nothing to do after that, I decided to check into my hotel, and this is where things get interesting. 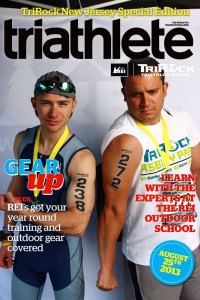 I don’t usually pray outside of going to church.  But after Brittany, a fellow Seton Hall student and on-campus coworker, died on August 17th, I asked her if she could do me a favor and help me out with race weekend since I had nobody to room with and I was going to be alone the whole weekend which made me extremely nervous.  Of course I wasn’t expecting anything, since typically you can’t just pray for yourself and expect handouts from the guy in the sky.  But this is where things get weird.  I pulled up to the hotel and I see a guy wearing a Seton Hall Basketball tee shirt walking out, and he looked mighty familiar.  It turned out to be Raffi, a student who was working on his Masters during my undergrad.  He knew a lot of my other friends from the University Center and he would come and hang out sometimes.  I asked, “What are you doing here?”  He said he was doing the race.  I flipped out and said, “Awesome!  Are you staying here too?”  He said that they were all booked up, and that it was the last hotel in the area.  There was nowhere to stay.  I said, “So what are you going to do?”  He replied, “Sleep in my car probably.”  I didn’t like that answer.  “No, I have a reservation for a room with two beds just because I could.  You’re rooming with me.”  At that point the valet was trying to get me to pull up because I was holding up the massive line of two cars behind me.  “Stick around,” I said.  I went to check into the hotel room and although they didn’t have the room with two beds, they still had one with the single bed and the pull out sofa bed so I took it without hesitation.  As Raffi took his stuff in first, I called my mom to tell her what happened.  Call me crazy if you want, but I am fairly certain that this was way too big to be a coincidence.  I looked up to the sky and actually thanked Brittany.  It had to be a miracle – she answered my prayer.

After we got ourselves situated in the room we hung out on the boardwalk for a while.  We were going to go to Porta for dinner but they must be popular because there was a 2 hour wait.  So we instead decided to get carbed up at Jimmy’s Italian Restaurant which had great food and good people.  It got late pretty quickly so after eating we prepped our bikes, did our TriTats, discussed race strategies and then went to bed for race day.  You can find my race report here.

After the race was over, Raffi had to leave to head back to Central Jersey.  I stayed in Asbury Park and went to get some more good food at Porta – this time their Hawaiiana pizza.  Again, it was awesome.  I bought a beach pass (but apparently participating triathletes didn’t need to – nobody was told beforehand).  I headed out to the boardwalk looking for a good spot.  It was pretty crowded.  I ran into another familiar face, this time my friend Monica who is another firefighter from my fire company at home.  That was totally unexpected.  Since she was with family I let her alone to spend time with them and went off to another part of the beach hoping to play some volleyball.  I never did get the courage to try my hand at it since some of the people playing were pretty good and I didn’t know all the rules off the top of my head.  I did get a good tan though.  At least I think so.  I’m still waiting for the redness to go down a bit.  At the end of the night I got a chicken cheese steak from Tony’s on the boardwalk, then finally met up with Pat, an old friend from high school before making the one-hour-plus drive back home.  I was exhausted at that point and I’m glad I didn’t fall asleep while driving.  It was a very fun eventful weekend.  I wish I could take vacations like that more often!