Breaking the Silence – Quick update on me and this site

This is nothing major or bad –  I haven’t updated since the end of the race season because I have had nothing really specific to share with you all.  I’ve been keeping busy in some new and different ways since I was in a bit of a funk after the tri season ended.  I’ve heard about things like that happen from Craig Alexander’s column in one of the recent issues of Triathlete magazine.  I haven’t been in the gym since the season ended but I did go on a run here and there.  I will start training for 2014 soon and I will make a post season-article on what I felt about the sport so far from my first year of participating.  There are a few things on a list I have yet to put out there and at some point I’ll work on putting something together (maybe a video!).

As for this blog, it’s not really going anywhere.  Yet.  It’s going to still be on this domain, but if you’ve snooped around (for example, removing the “tri” from the beginning of the URL) you may have found my music website.  I wouldn’t be surprised if you told me that you noticed it hasn’t been updated for months.  You would be correct.  I have no immediate plans yet but I do intend to replace the entire front website with this blog and make it multifaceted.  I am not just a triathlete or just a musician or just the several other things I could talk about.  There are other subjects I’d like to write about and not feel like I’m going off-topic.  I would split the subject matters up into their respective categories and make a catch-all for things that may not exactly fit in.  So if you’re interested in only reading the Triathlon stuff, you would be able to click the Triathlon thing.  If you want to see what’s going on with Music, you could click the Music thing.  But instead of having to put something else in the web address, it will all be in the same place.  This new reorganization of things will probably take place a bit later in the year (I know, we’re in Q3) but it should make it easier for me to manage what’s going on with my site and give me the opportunity to write and organize a bit more.

So to finish off this post, here’s me in the Iron Man Mk42 helmet for the armor I’m trying to build in time for Halloween.  (You see, I’d like to be able to write about these things on my website and not look like a lunatic – a guy writing about cosplay on a triathlon blog?  What?!  So this is one of the reasons for my ideas to consolidate the website.)  I’m a nitpicker and very detail oriented but this was slightly rushed so yes, I messed up a couple things here and there but I’m happy with it so it will be plastic coated and painted as it is.  The picture is before I made a fix to the chin and the forehead. 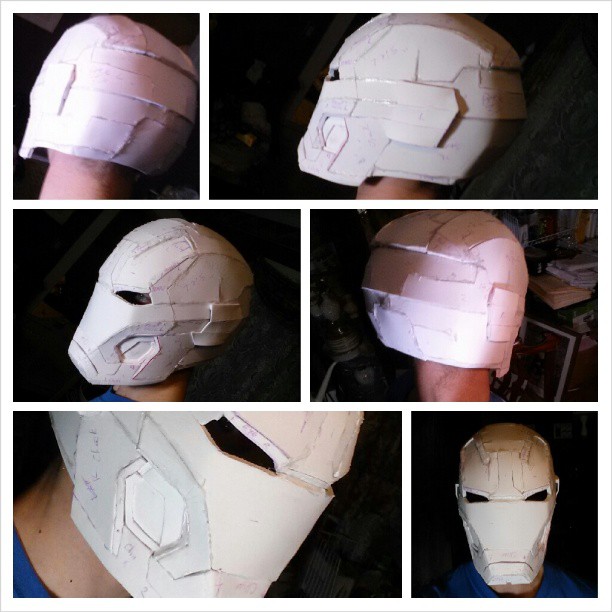