Going a little crazy in September. 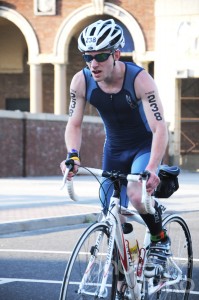 Well, it’s September already.  The summer is winding down and the temperatures will start to drop near the end of the month, the races become few and far between, and training eventually moves indoors.  I’m taking September as the narrowing down of my first Triathlon race season.

So far I have been successful in a relatively small way.  While I didn’t place as high as I had hoped from how little I have trained between races, I’ve successfully finished every race and my lowest ranking so far has been 11th place in my age group at TriRock Asbury Park.  I can attribute that slightly the smaller field of 21 people in my age group though.  My timing was still pretty average for me.

To end off the season for me I’m doing three races back-to-back-to-back.  That’s right – three consecutive race weekends.  Sure, I might be a little bit crazy but I think it will be a lot of fun.

My ultimate goal for these last three races this season are to bring my time down by a couple more minutes.  To do this there are a few little things I need to work on, but with all those little things the seconds add up.  One of the first things is that I’m not aggressive enough on the swim.  When there are slower people in front of me I’ve been hanging back instead of making an attempt to pass.  After that, I’ve been using too much time in T1 – I still don’t have sockless bike shoes.  The bike itself could definitely be faster – I just learned the comfort of churning the big gears on the bike helps quite a bit.  I’m not so worried about T2 but on the run, I can’t let the leg cramps slow me down – and when they do go away I need to pick up the pace sooner.  Since I can’t rely solely on setting a goal for placement in my age group (since it can vary with the number of people and the skill of those people) the best I can do is bring my time down a couple minutes or more.

Next season, I plan on having a good aero bike setup to help on the bike.  I know that can save minutes.  The winter will also be very important since I plan on getting back into weight training to help get my strength up.  Luckily with the gym I’ll also be able to keep spinning indoors and running on the treadmill so I’ll have full comprehensive training for a strong 2014 season.  It’s easy to write the plan – it’s harder to actually stick to it.

So here we go.  I’m registered for Skylands Triathlon this coming weekend which will start my three consecutive race weekends to finish off the season.  Then there is the Buckman Triathlon and the Hightstown Triathlon and that’s going to be it.  This is assuming I don’t find another local race in October to feed my addiction.

Enjoy your Labor Day weekend, everybody!