I took a nice rest week after the Doc & Sok Sprint Triathlon I did last Sunday to recover from the intense calf cramps I experienced on the run portion of the race.  I was hurting for a good couple of days until this past Wednesday when things finally calmed down.  I wore my 2XU Elite Compression Tights to try to speed things up a bit and whereas the result didn’t seem too immediate, by the end of Thursday I felt pretty much as good as new.

Since I decided not to do another sprint in northern NJ today I went South and met a bunch of tri club members to preview the bike course for NJ State Triathlon.  It’s a super easy course, and it’s very flat.  It’s around 12 miles and on fresh legs it was easy to average 17mph.  There really isn’t much in the way of describing it because it’s not a technical course at all.  It’s a lot of straightaways with turns at intersections and that’s about it.  There is an interesting circle thrown into the mix in the community college portion of the course but that should be no big deal, you can’t really go fast in a roundabout like that anyway so slowing down will be pretty inherent there.  I’m still a bit intimidated by the fact that it’s going to be a very busy race with hundreds more people than the race I did last week so I’m hoping the swim isn’t too bad.  The last thing I want to do is panic again. 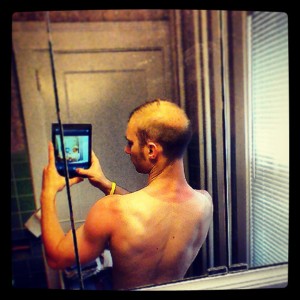 After the ride the lot of us went for a 5k run (3.1mi) to brick the workout.  I came up a bit short at only 3.07 miles but that’s close enough for me!  I kept it at a relatively easy pace but picked it up a bit here and there just to change it up.  We came across a couple deer having some breakfast in the woods so there was some nice scenery here and there especially with the lake nearby.  It was a pretty good run despite the almost-blister on top of one of my toes.  Oops.  Afterwords I found I got a pretty good Tri Suit tan line going.

NJ State Tri is in just under two weeks.  I’ve already got my countdown here on the website to watch race day approach!  I’m hoping I do better on the swim than my last race.  There’s really no way for me to practice mass start open water swimming between now and then – I’ll just have to tackle it as it comes.  Hope everyone had a good weekend!