After a bit of instruction, and a bit of practice over time, swimming is fundamentally simple.  All swimmers know that there are two basic things that are propelling you through the stroke – your arms and your legs.  The idea is that you pull yourself through the water with the force of your arm using your hand as a sort of paddle, while the legs propel you forward with a small but effective kick.  Sometimes this doesn’t work out too well.  Nobody is perfect when it comes to swimming stroke – some swimmers just happen to be stronger than others.  However, one person I saw at the pool had the freestyle so fundamentally incorrect that I had to say something. 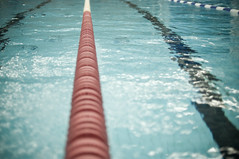 One day, there was a guy and his friend sharing a lane next to me at the YMCA swimming laps.  They are there pretty often just doing their swimming as a form of cardio.  I was doing a training swim with short 50yd intervals while throwing in a couple of 100yd ones in there to test my endurance.  In between those longer intervals I take some time to see what is going on around me and catch my breath.  My eyes were drawn to one of the guys in the lane next to me who was doing a 50yd freestyle while the other was taking his break.  Well, at least he was trying.  His stroke was very strange, as if he was prone in the grass just sort of crawling.  Another way you can imagine it is using each arm in the stroke to do a one-sided lat pulldown with your hands cupped as if the bar was in the water.  His kick was way too wide and could be compared to riding a bicycle with very short crank arms.  Needless to say, this guy was barely moving through the water.  My best guess is that his pace was somewhere around 1:50-2:00/100yd.  Seeing him struggle with that was killing me.  I waited until he got back to my side of the wall and gave him a couple of suggestions including switching to a flutter kick, paying attention to body roll, and making sure his arms made a full stroke with a high elbow before reentering.  I watched as he changed his technique a bit and he was noticeably faster.  Even he was impressed with how much faster he was going by improving his form.  He thanked me and kept working on that technique the rest of the time.  His friend was curious and asked a couple questions and I told him what to pay attention to for a more effective swim workout.

Even if you’re not swimming for a competitive goal, working on form and technique is pretty important especially if you plan on having an efficient and fun workout.  I’m constantly trying to improve my stroke efficiency and paying attention to the details so that all these little parts to the overall technique come naturally.  Just keep swimming.

For discussion:  What is your favorite swim stroke to give you a break from freestyle?  Comment below!