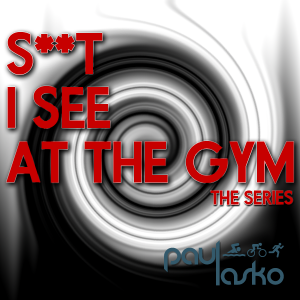 Once in a while when I’m at my local YMCA, whether it’s swimming, cycling, or running, there’s always something that catches my attention and makes me shake my head.  Most people there don’t have the same goals that more serious athletes have, but sometimes what I see them doing makes me question if they even care about whether they’re doing their workout in a way that is safe and effective.  And don’t get me started on the people who are at making an effort to work out, but are simply lazing through it.  Sadly, I have to start with that.

Welcome to the first installment of S**t I see at the Gym.

Monday I went to the gym to hit the spin bike for a 50 minute session to test the comfort of the chamois in the untested one of my two tri suits.  People were already using both Spinning bikes, so I did a warmup walk on the treadmill until one of them freed up.  On the treadmill next to me was a dude who never looks like he prepares for the gym.  He was in cotton cargo shorts that extended below the knee, and what looked like the biggest shirt he could find in his drawer.  I can’t really put any blame on him for that if he can’t afford good workout clothes, but I haven’t seen anybody else who doesn’t even put an effort into wearing good effective lightweight clothing with sweat management.  His sneakers looked like some heavy clunky aged Reeboks.  Appearance aside, it’s great that he’s working out and getting his run on, but here’s the problem.  I don’t know if I just caught the awkward end of his routine, but the only way I could describe it was “un-running.”  It is a little difficult to describe what’s going on here, so pay attention, 007.

Once I started my 3.3mph walk, I noticed something strange going on with this guy.  He starts chugging along with a half-decent heavy forefoot strike for about 10 steps at the front of the treadmill, and then suddenly stops his stride, drops back about 3/4 of the way on the belt as he’s doing some strange interval, then picks up again and dashes to the front of the podium.  While doing this he’s desperately attempting to keep his earbuds in.  I thought, “Holy crap, this dude’s going to go flying and faceplant behind the machine.”  He must have done this about a dozen times before all of a sudden he leaves the belt going and holds himself up by the arms for a moment or two, then drops back down to the moving belt to continue with a few more awkward faceplant fakeouts.  The worst part is that as he was holding himself up and kind of swinging from his arms above the belt, he scraped it a couple of times leading to an aggressive squeaky scuff.  He could have just as easily hit Cool Down and did a 5 minute graduated slowdown, but instead just stopped the treadmill, wiped it off, and walked away casually.  I was getting a bit irritated and visualized myself pulling the emergency stop magnet, but I held back and just kept walking.

Sometimes I want to offer advice to people especially in cases like this where safety is a concern.  I am not a professional trainer or anything, but I think this guy definitely needed some safety advice at the least.  It probably would have been a good idea to say something so that he doesn’t end up hurting himself.  Because I stopped myself from saying something out of irritation, I’ll make sure I offer some friendly advice next time.

Discussion: Have you ever seen anybody go flying off a treadmill?  Share your funniest treadmill faceplants in the comments below.