[Updated] I Have This Weird Ankle Thing Going On: The Search for Good Running Shoes

Warning: This one is a bit long winded, so grab a cup of tea or two and get ready for an interesting story. 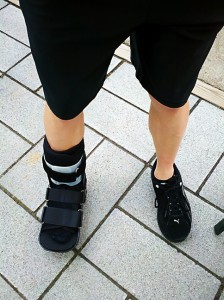 If you read my About page, you might have seen the part where I spent the beginning of the summer of 2011 trying my hand at running.  At the time I was wearing the Saucony Grid Flex running shoe that I got with no expert help.  Just went over to the general big name sporting goods store and picked them up because the price was right and they seemed like good shoes.  I knew nothing about running shoes.  Once in a while I had a discomfort in that ankle and it slowly built up.  And after about a month, I got sidelined by an unknown ankle injury.  It was a slow painful walk home the day my right ankle decided to finally give up.  It was painful and swollen.  I had the X-Rays, and the suggestion from the orthopedist that we could try a cortisone shot regardless of MRIs.  That wasn’t a favorable decision for me at the time, so we just decided to request the MRIs.  Another problem that came of it was being denied them by my insurance company…  Three times.  And so my first visit to the orthopedist was an unfruitful one since X-Rays showed nothing going on with the bones.  That was the last of my physical activity for a long time.  I was put in a boot without crutches for a couple weeks at least, and as the swelling in my right ankle went down, I finally removed it, but didn’t try running again.  I was afraid.  The thought in my mind was that if I avoided running, then that was a surefire way to avoid injury.

So, I have this weird <insert body part here> thing going on.  It’s one of those cliche phrases that you hear a lot of endurance athletes say as a reason to either take a rest day or do some cross training.  For me it was an excuse to take a long time off and just focus on my bodybuilding which also eventually slowed down for various reasons.

While on a vacation in Missouri, I picked up my first pair of Vibram FiveFingers.  After a couple quality control issues, I finally got a good pair of black Sprints.  Not my favorite though due the length of the heel.  The first time I tried running since my ankle injury, I did it in the sprints at the hotel.  I just did a short thing to see how it would feel.  In the end my achilles were a bit tender since it was something new, but the ankle thing didn’t bother me.  I could have taken the time to just transition to minimalist\barefoot shoes (it’s been a couple of years since then, after all), but I never really got into it. 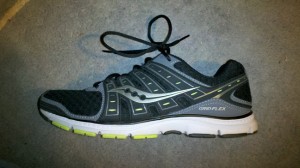 Once I started my triathlon training, I knew that I was going to have to start running again, since that is just an inherent part of the sport.  I started up in the Sauconys that I knew destroyed me just a couple years earlier.  And the ankle discomfort was there, sometimes in both ankles, but it’s been mostly in the right.  Leaving the gym has not been a fun thing because of the discomfort in them.  From all the research that I had done on running shoes, and how minimalist shoes fixed a lot of problems for people, I figured I would try my hand at doing some training in my FiveFingers since I now own 5 pairs of them.  I didn’t feel the ankle thing with the FiveFingers after giving them a shot a couple times.   However, since my fitness was already starting to come back pretty fast, I knew that taking a slow transition into them would be impeding on my returning fitness and probably holding me back.  So the Sauconys were still there as an option, and I have been using them, but sparsely, meaning my running training has been quite sparse and inconsistent.  I got to the point over this weekend to finally do something about the problems I’ve been having. 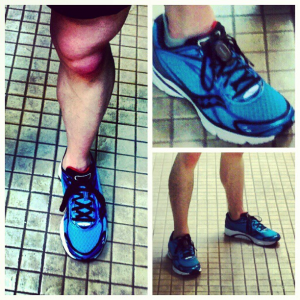 There is a Sneaker Factory location nearby where I live, so I figured it would be a good idea to go there.  Despite having discounts with the tri club for a running store that’s 30 minutes away, the 15 percent discount I would have had at our club’s sponsoring running store would essentially be spent on gas to get there and back home.  I talked to a runner named Zack (not sure if it’s spelled with an H or a K) who took a look at my walking stride and found that I’m an overpronator.  He brought out a couple options, mostly from Saucony, and I decided to give the Mirage 2 a try for $105.  It’s advertised as a minimalist shoe with a 4mm offset.  I’m not sure how they get away with calling it that since there’s nothing really minimal about it (and most other running shoes like it), compared to FiveFingers.  I took it on the treadmill that evening for a short 2.7 mile run and left unsatisfied.  My left ankle felt completely fine, but they seemed to exacerbate the discomfort in the right, adding a new uncomfortable feeling on the inside of the ankle as well as the front-right where the original issue lay.  I boxed them back up and went back today to try something else.

Zack was there again and he helped me right away.  My nervousness was almost through the roof.  I just wanted to leave with a good pair of shoes that wouldn’t hurt me and stop bothering these poor people who have to deal with my anxiety and the stubbornness of trying to get them to give me a more minimalist-driven shoe since I was convinced “support” was not the answer.  That aside, I first tried on a pair of Asics Gel-Neo33 (the first version, it seems, since there’s a “2” version on the Asics website).  In a couple back-and-forth jogs, I felt that twinge in the front right of my ankle like I do sometimes as I speed-skip up the stairs.  Everything else felt good otherwise.  The twinge was still a bit concerning, so I tried a pair of Newtons (I’m not sure of the model, but it was a grey one with the black lugs) that would have cost $150.  They felt pretty good in my few back-and-forth jogs up and down the center of the store.  My toes were close to the front, however, and I didn’t want to have to wait longer to get a good pair of shoes since these seemed a half a size short.  The Asics seemed enticing at the time given the circumstances, so I left with those in an even exchange.  In a joking way, he said, “Hopefully we won’t see you in here again.”  From the start though, there was this subconscious feeling that I would not be their favorite customer.  I owe them a lot of thanks though for putting up with me this weekend.  I know I wasn’t that much of a pain, but they were a real help and very patient. 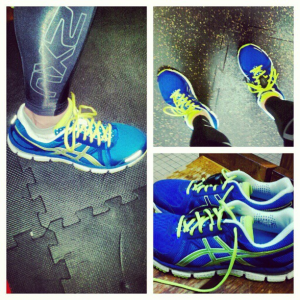 I walked one of the puppies and decided to go to the gym immediately and do a short test on the treadmill.  I started out with a slow walk and moved up to a 5mph jog for a couple minutes.  Then came the real test.  About 8 miles per hours for 4 minutes, and still nothing bothering me in the ankle.  At about 9 miles per hour for a couple more minutes, I wasn’t feeling anything that felt dangerous, just a little arch discomfort that would probably go away with time and adjustment.  After the run though, I was amazed.  These shoes seemingly prevented my ankle thing.  I’m going to take them for another treadmill run, either a 5k or a little more to see if I’m dreaming or not, but tonight’s run seemed very favorable.  They’re not as light as I’d like since I’ll probably be wearing them for both training and races, but I left the gym feeling like I was floating on a cloud from how how happy I was to not be in any discomfort.  We’ll see how they pan out for next time and I’ll be sure to offer an update at a later date.  Judging from how both pairs of shoes that have hurt me ever are Sauconys, I don’t think I’ll be opting for them in the future.  Wish me luck!

I found a really interesting article online written by Swedish runner Anders Torger.  It was written as a guest blog post on RunBlogger.com a couple years ago but it’s still relevant.  Torger wrote about his scientific trial-and-error based experiment with overpronation and whether or not it’s really bad, and how to prevent picking the wrong shoes that can actually make it worse (which I suspect may have been happening in my case).  It might be a good idea for me to do some videos of my running to compare the difference between my old shoes that bother me and the new Asics that aren’t.  That should make for an interesting blog post.