For those who know me, you already know where this is going to go.  For those who don’t know me, well, you’ll probably already have heard at least half of what I’m going to say from someone else.  However, I have a slightly more personal story from the perspective of someone who has done some things with the LIVESTRONG Foundation in the past.

I’d like to start my story in 2007 when I got my first road bicycle.  Lance Armstrong, and my awe at local bike races, were huge influences on my decision to take up the sport a little more seriously.  It was in 2007 that I decided to find my first road bike and made the huge mistake of getting one of those cheap unreliable department store road bikes that were available at the time.  After several popped tubes and embarrassment at riding my rubbish bike in public from the horrible fit due to the large frame, I finally upgraded to a Specialized Allez in May 2008.  It was lighter, I could go faster, it had proper components, and I was inspired to do something drastic.  I decided to participate in the Philadelphia LIVESTRONG Challenge 70 mile bike ride.  And so I did, for three consecutive years, raising over $2,000 combined.  In 2010, my third and most recent year riding in the LIVESTRONG Challenge, Lance passed me and a bunch of others on his way back with his riding buddies due to rain and 100mi course closure.  I thought that was the coolest thing in the world, even though he was a blur on a downhill as we were all climbing. 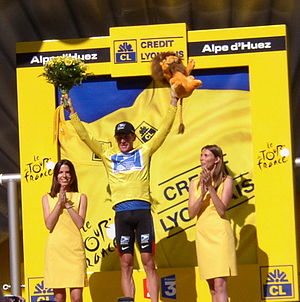 I used to watch Le Tour de France highlights whenever I could.  It was very rare since I never had cable television.  Seeing these guys defy normal human strength on the mountain stages was exciting.  I never thought too much about it, but in 2007 I noticed something that caused my logic machine to turn on and hit overdrive.  Michael Rasmussen was a twig.  And he was wearing the yellow jersey.  I thought that this was impossible, for someone to have such low mass in his legs to be ahead like this.  It didn’t make any sense to me, especially with the way the mountain stages are lined up in the Tour.  Next thing you know, he’s removed and fired by Rabobank on the day of his 16th stage win.  His case to me was very obvious, especially after I heard he was missing during required testing.  His career is now over as he personally stated on January 31st of this year.

In the case of Lance Armstrong, the situation is almost similar.  He faced cancer in his early Tour de France days, beat it in a year, returned to cycling to win a total of 7 yellow jerseys.  All this time he was building his foundation to help cancer survivors.  It was his great story of beating cancer to win the Tour 7 times that really put his Foundation in the limelight.  While he was battling doping allegations, quite aggressively at that, he would fight to put a worldwide focus on wiping this disease off the map.  But the constant denial of doping, even putting down or allegedly threatening others who accused him of doing so (even if they knew firsthand), over years built up this notion and increased people’s hope and for so long they believed him.  I was one of them.  I wanted to believe him, but I had my reservations.  I wasn’t sure.  I was on the fence.

Over the past few months when all this hullabaloo started about him giving up even fighting the charges anymore, I knew what was beginning.  It was the end of his era.  I thought he’d never come clean about anything.  And then the public learns he’s going to talk to Oprah about it.  One thing that came to mind when I learned this is that, “But she’s not a journalist.  She’s not going to ask the hard questions.”  And she really didn’t, in my opinion.  From what I saw, he knew what he was going to say.  And just like his doping practices, he did so methodically and carefully.  There are still things he is holding back, like the donation to the UCI (which he claims he loathes), and he hasn’t admitted to doping during his comeback when he took third in the 2009 Tour with Astana.

This whole thing was extremely depressing for me because I put my faith in this man for all this time.  He built up everybody’s faith over so long only to have it come crashing down, which he knew would happen at some point.  He was one of my biggest inspirations in cycling.  And although I never raced, I’m glad that I was able to do what I did as a part of the LIVESTRONG Foundation.  However, his reputation is now ruined.  The LIVESTRONG Foundation’s mission was Lance’s mission, and along with the association comes difficulty for some people to continue to support it.  To those people, all I can say is remember that it’s about your loved ones, family members, or friends who may have cancer and to please continue support them.  Over the three years that I did the LIVESTRONG Challenge, I found it increasingly difficult to raise money for the same cause, and so I took some time off from the fundraising, but I still wear my wristband.  I think that the LIVESTRONG Foundation will rebound at some point, but its creator’s struggles are ongoing and I’m fairly certain they’re not over yet.

That is where I wanted to end this article.  But I thought I would make some final thoughts in how this all relates to triathlon at the current time, since that is one of the main focal points of this blog.  Lance started out in triathlon, and he wants to get back into it.  The sport is very small and relatively new, having really just started in the US in the 1970’s.  Triathlon has some pretty good doping controls because it is inherently not a team sport and there is less of a chance for that sort of peer-pressure from teammates or coaches.  Both professional and amateur triathletes race as individuals which makes it difficult to both find and fund doping.  In fact, prize money is very small in triathlon.  (The 2011 Ironman series paid a purse of $75,000 up through 8th place.)  Regardless, there are still control tests for the pros.  I have a hard time believing that Lance making a comeback into triathlon would be a good thing.  I’m sure that if he did, there would be a negative mark put on the sport and participation (which is mostly amateur still at this point) would decrease.  I think that I would rather him just take a back seat and try to pay his dues and focus more on fixing his situation than competing.