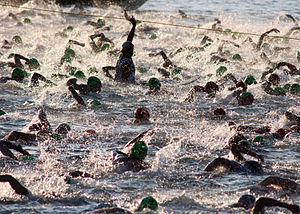 If you type “What is triathlon?” into Google, you get this really smart card thing that says this: 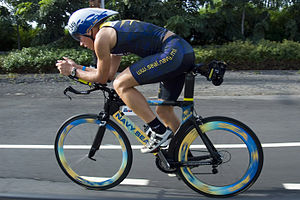 In a nutshell, that’s basically it.  Triathlon is a multisport event consisting of three endurance sport disciplines.  Typically those disciplines are swimming, cycling, and running and most often take place in that order (referred to as leg hereon in).  Between each leg is a Transition in which each triathlete prepares for the next leg.  A course will have a dedicated transition area where all the athletes set up their equipment.

There are amateur athletes called “age groupers” as well as elite (also known as professional) triathletes who do this for a living.  Age groups span ages of 5 years.  For example, my age group would be 20-24 currently.

There are different distances to triathlon.  We’ll start from the largest and work our way down.  The largest and one of the most publicized events is the IRONMAN.  This is called an ultra distance race.  This is a large corporately sponsored series of races around the world that end with a World Championship in Kona, Hawaii which usually gets a yearly special on NBC Sports.  Official IRONMAN races as well as other IRON-distance (IRONMAN-distance races that are not governed by the World Triathlon Corporation) consist of a 2.4 mile swim, 112 mile bike ride, and a full 26.2 mile marathon.  Participants have a window of 17 hours to complete the race, and there are time cutoffs for each leg.

The World Triathlon Corporation also has a half-Ironman distance race, called the IRONMAN 70.3.  This is called a long course race.  It consists of a 1.2 mile swim, 56 mile bike ride, and 13.1 mile run (half marathon).

The third smallest event is the Olympic-distance race (lesser referred to as Intermediate distance).  There are official races with special rules put on by the International Triathlon Union which qualify athletes for their national teams to go to the Olympics, hence the name Olympic distance.  I’m still researching on how one goes about qualifying for their national team and what kind of events are eligible for this.  If you’re curious and want to try to find more info yourself, check out the International Triathlon Union website, or the website for your national governing body (for the US, this is USA Triathlon).  All these links can be found together on the Useful Links page.  Olympic distance races are typically 1.5 kilometer swim (.93 mile), 25 mile bike ride, and 6.2 mile run.

Sprint Distance races are the ones that most aspiring competitive triathletes start out with.  They are more variable in each leg but are around 750m swim (.47 mi), 10-15 mile bike, and a 5K run (3.1 mi).

Once mastered, many triathletes move up from Sprint distance into the larger races.  Some go on to be elites who race many IRONMAN races, and others stick with the ITU format or Olympic Distance races.  This all depends on the goal of that athlete and their own desires for challenge.

People who would like to try for fun can also do Super Sprint races, commonly held indoors, which are even shorter events consisting of something like a 100m swim, 5 mile bike, and 1.5 mile run as a random example.

Triathlons can differ with the weather.  Some races in the winter will have different disciplines involved.  For example, a winter triathlon may consist of cross country skiing, mountain biking, and running.

There are other multisport races called duathlons that consist of two disciplines but three legs.  For example, a duathlon can consist of a Run, followed by a Bike, then another Run, but will only ever have bike and run stages.

I’m sure I missed something you might want to know.  For more information including the history of Triathlon, visit the Wikipedia article.